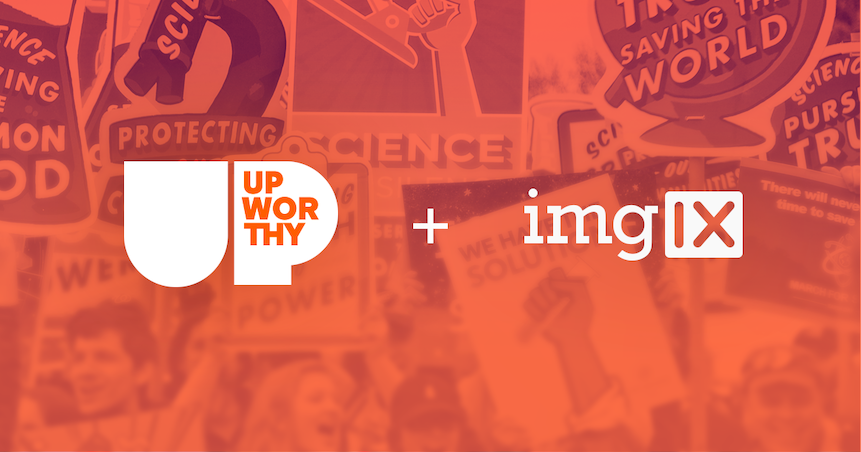 Online publications tell important stories, and visuals are the vehicle driving those stories forward. The popular website Upworthy harnesses the power of viral content for good, creating visual stories that spread across social media as a way to raise awareness of important issues. The site generates over 50 million pageviews each month, but is maintained by a team of just six engineers.

Succeeding at such a massive scale with a small team has meant being smart and scrappy. The Upworthy dev team has a motto: focus on little things that have a huge impact. When they began searching for ways to boost metrics and streamline editorial processes, they noticed that image handling was coming up again and again. When a page was underperforming, a poorly-optimized image was usually involved. Pages loaded slowly because images were too large, or else the visual design of the page would be marred by overly-compressed imagery.

The team fixed these issues when they could, but since they often only had the image that was uploaded to the server rather than a high-quality original, there was a limit to what they could do. Forced to rely on people manually reporting faulty imagery, they had no idea how many bad images they didn’t find.

With image handling limiting the productivity of Upworthy’s editorial team, the dev team chose to create a guide on how to manually edit and upload images. This turned out to be overly time-consuming to enact and wasn't consistently followed in the quick-hit, always-on environment of an editorial department. With images making up nearly 70 percent of the weight of some Upworthy pages, major slowdowns appeared to be unavoidable; the team needed a solution, and fast.

Upworthy needed something flexible, extensible, and dependable. Something that could free the team up to work on more interesting problems.

After exploring several options for automating its image handling, Upworthy decided imgix was the was the best choice for its needs.

Key to that decision was the fact that we are able to function as an on-demand image processor with caching, transforming images only when they were requested by a user. This freed up the dev team’s time, providing them with more flexibility throughout the day to work on other important issues. With imgix’s easy-to-use API, integration was a simple and seamless process.

After integration, the team was able to standardize its imagery and drive down load times across the site. One of Upworthy's metrics is its number of active visits (visitors who stick around and consume content rather than immediately clicking over to something else). They saw daily active visits spike by as much as 50 percent after implementing imgix.